Tim Perkins took us to a top secret small flow on day three to chase some trophy Alabama spotted bass. This was the moment of truth. In the previous two days, he had coached us on some of the presentation that he has used to land countless big spots. Tim said those days served as our practice so we could “get into the zone” before this trip.

Alabama’s small creeks and rivers are a world apart from the massive big rivers that I guide on in Pennsylvania where super long accurate casts are the way to catch big bass most of the time. Here on Alabama’s small flows, it’s all about skipping, pitching and threading the needle between overhanging trees, submerged logs and brushy banks in close quarters.  The practice days where done. We had our “short game” firing on all cylinders now. It was time for the final exam in “Spotted Bass 101”.

We woke at 4 a.m. for the third day in a row. My son and I were both feeling a little fatigued from our long days of paddling and fishing. Coffee at this point was an absolute necessity. I tried to order a bag of coffee with an “IV” but they didn’t have those at the local Jack’s. For those who may not know, Jack’s is the southern version of Burger King…. at least that’s my perception as a northerner. Ha.. ha!

Ready the river chariots! We are packing light today. This small flow is full of blow downs and root wads. It will be tough navigating but this is where the big fish live. Let’s go get them!

We had to line our kayaks down a steep mud embankment to get to the water. There was a lot of “pushing and pulling” to get the kayaks down to the launch area but even us old guys (Juan & Tim) can still get it done! I grew up doing this country boy stuff…. just in a lot colder weather sometimes.

I got on the board first hooking up on a spinnerbait cast into a pile of wood along the weedy shoreline. The spot hit the bait like a ton of bricks. It’s hard to tell how big these guys are when you hook up. They have a lot of heart when the fight!

Got the fish to hand. It wasn’t what we where looking for but it put a bend in my rod and a smile on my face. I have to say that my son did a great job capturing the actions. These are darn good shots!

Juan Jr. struck gold first! This is a nice spot over 18″ that he literally wrestled into the kayak with the help of Tim. I think he was caught off guard on this one. We had been catching some decent fish but non this chunky until now. Lots of smiles, high fives and pats on the back after breaking the big bass barrier!

This young man was on a role. Another nice spot! Juan Jr. was picking up the big spots like a Hoover vacuum cleaner!  He definitely had the spinnerbait presentation down that Tim had taught him. This is one proud dad in the photo!

I actually had to sneak this 18″ spot in on Juan Jr. He had thrown to a log and got a follow from a decent fish but it missed his spinnerbait. I was standing on the bank taking a break but took the opportunity to follow up on his fish. Ha! Nailed it! Sorry son!

I took a break on a gravel bar but kept fishing because we were on such a great piece of water and the big bite was on. I only take my PFD off when I’m on the bank. If I’m in the water or in the kayak, it’s on and buckled! Tim is giving me a hand with this one. Another fish over 18″. At this point, I”m pretty much having and out of body experience!

You can tell by the grin on Juan Jr.’s face that this is a real pig of a fish. This ended up being the biggest spot of  our trip. I healthy fat bellied fish that measured in at 19.5 inches. That’s a real trophy spot. He had to work for this one. It was tangled in a mass of logs but with some patience and a little fancy rod handling Juan Jr. freed Willie! I’m thinking that Juan Jr. is going to get an “A” on Tim’s Spotted Bass 101 final!?! 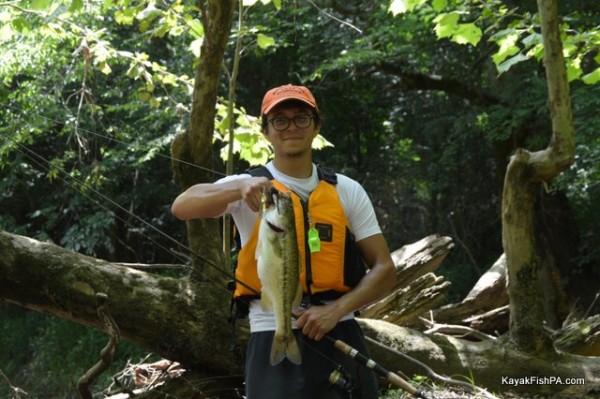 This is my biggest spotted bass of the trip. It measured in at 19″ on the nose. It hammered my spinnerbait as I was slow rolling it alongside a submerged log. Don’t think that Juan Jr. is smiling in the background because he is happy that I caught a nice fish. He’s actually gloating because he knows that he is the top dog of the day landing the most spots over 18″ and the biggest spot at 19.5″. I don’t think I’ll live this one down for quite a long time. I’m “ok” with that. If I have to be outfished by anyone, I want it to be my son. What an incredible and special day on the water. I want to publicly thank Tim Perkins for sharing his water and his expertise. This day made memories that will last a life time! 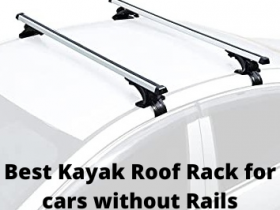